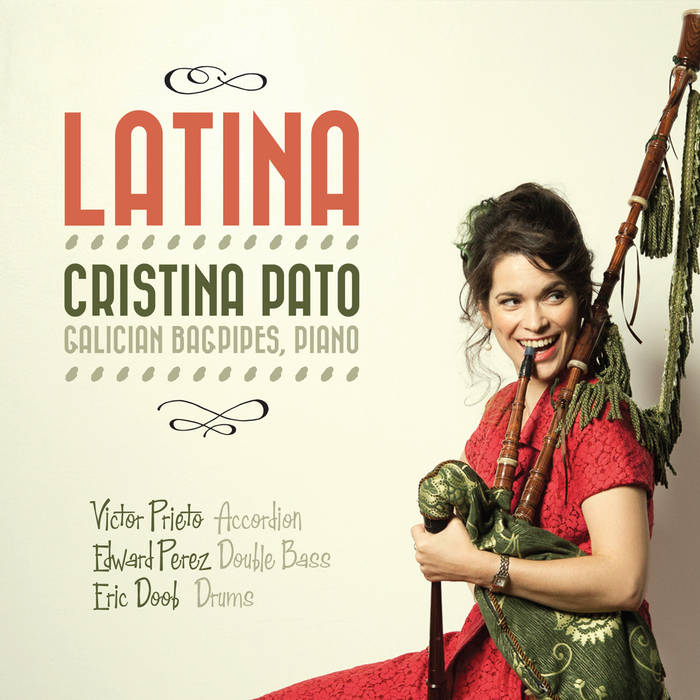 It is incredible to think of how many of the world’s cultures are linked. From the origins of the Latin languages in Europe to the music of Afro-Spanish South America, the links between the two continents are diverse and deep.

The tremendous Galician bagpiper and pianist Cristina Pato decided to further explore one of these chains of cultural adaptation, specifically through the evolution of six beat rhythmic patterns originating in the Latin music of Europe and migrating to South America. Her new recording - Latina - provides a diverse program of musical styles performed by an expert group of musicians fluent in jazz and folkloric music.

Originally hailing from the northwestern province of Galicia in Spain, Pato has become something of a sensation since arriving in the United States. She has performed regularly with her own ensemble and released a recording (Migrations, 2012). Pato has become a member of Yo Yo Ma’s celebrated Silk Road Ensemble, which has toured the world.

The concept for Pato’s Latina stemmed from her fascination with the word and what it has come to mean. Although originally referring to a group resident in the Italian peninsula, the term Latinos/Latinas is now generally used to refer to individuals whose ancestry stems from Spanish origins. In the same way that Latin based languages have spread widely, the musical elements of Latin cultures have been propagated across continents.

Through her musical investigations, Pato discovered the recurrent use of a 6/8 pattern (six beats of quarter notes in a waltz-like feel) from the tarantellas of Italy all the way to the Afro-Peruvian style of landó on the Pacific coast of South America. For Pato, finding the connections between these diverse cultures has helped her to find her own more positive meaning to a term by which she found herself constantly defined, Latina.

For Latina, Pato commissioned her friend and bassist Edward Perez to write music that would frame the journey of a specific rhythm with roots in Italy and Spain across the Atlantic where it ingrained itself in a multitude of musical cultures, including Peru and Colombia. Perez had lived in Peru for a time to study Afro-Peruvian music and introduced Pato to some of the styles, which immediately reminded her of the muiñeira, a Galician dance form in 6/8.

To perform The Suite and the two additional compositions presented on Latina, Pato enlisted the expert Galician accordion player Victor Prieto, bassist and composer Edward Perez and the phenomenal Eric Doob on drums.

The Latina 6/8 Suite is comprised of six pieces, each representing a different style using the 6/8 rhythms that migrated from Europe to the Americas. The vibrant first piece “Fandango: Prueba de Fuego” is named for the Spanish dance form that traversed the Atlantic ; this is followed by “Landó: María Landó,” a wonderful example of the Afro-Peruvian form written by poet César Calve and legendary singer Chabuca Granda. The flamenco influenced “Tanguillo: The High Seas” is a rousing, stately piece that features Pato on piano.

The Suite continues with a piece in Venezuelan form, “Joropo-Festejo: Muiñera de Chantada,” a party song that utilizes the Venezuelan rhythm over the Galician. The next piece “Currulao: Currulao de Crisis” is an example of a Colombian criolla rhythm, usually arranged for marimba, voice and drums, with Pato’s expert piano playing substituting for marimba. The Suite concludes with “Tarantella-Muiñeira: Epilogue” which starts with the Italian rhythm, and quickly morphs into the exuberant Galician folk tune.

Cristina Pato’s fascinating exploration of the different rhythms that have migrated throughout the world via populations with Latin roots has birthed a wonderful collection of music on Latina. The diversity of sound and texture that can be generated from the same time signature (here a simple 6/8) is an intriguing parallel to the intricacies of the seemingly simple label Latina.

Bandcamp Daily  your guide to the world of Bandcamp

Guest hosted by Tamar Osbourn aka Collocutor and Toshio Matsuura.